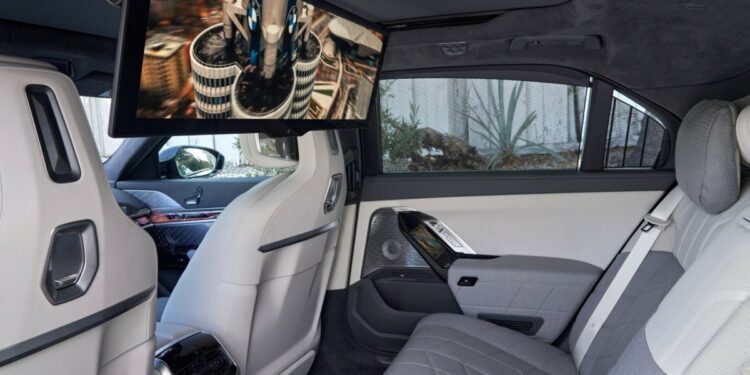 The fact that the electric BMW i7 is the starting signal for the new 7-series and not a version with six or eight cylinders shows that an executive car must also keep up with the times. But beware of the big screen TV…

The 7 Series is BMW’s driving calling card. Not only the design, but also technology points the way to the future. This results in breathtaking cars, such as the sleek BMW 7 Series from 1994, which was available for the first time with GPS, curtain airbags and a television.

His successor was striking in another way. Not so much because of the iDrive operation, which was initially inscrutable, but after some changes quickly became the epitome of user-friendliness. It was Chris Bangle who brought a breath of fresh air to the Bavarian headquarters and drew one controversial model after another. The 2001 7 Series shook conservative buyers. Nobody got tired of talking about the appearance, and the discussion is actually still not over. Although the camp of fans of the ‘Bangle Butt’ devised by Adrian van Hooijdonk is getting bigger every year.

There have also been many discussions about the appearance of the latest BMW 7 series. BMW frankly admits that the taste of the Chinese buyer was leading in the design. Apparently they like a colossal grille there, a big black hole in which everything disappears. The headlights on both sides are relatively small, exactly in accordance with the prevailing fashion. How long do we need to get used to this? Perhaps we will still appreciate the 7-series in 2040.

Driving the BMW i7

Of course, when testing, it’s not about looks. The dimensions of the 7 Series are impressive, with a length of 5.4 meters (making it 13 cm longer than the old extended version) and a wheelbase of 3.2 meters. The new 7-series is only available with a long wheelbase, with positive consequences for space.
In the front, the dashboard with its flat instruments takes up little space and in particular in the rear right you will find a level of comfort that even a lounge chair from Charles Eames can hardly match.

A chair massage is also possible first. Its controls are located on the armrest in the door, so you don’t have to lift a finger to take advantage of all the conveniences.

TV screen in your i7: ultimate luxury or completely unnecessary?

It becomes sensational when the 31.3 inch (just under 80 cm) cinema screen slides out of the headliner. Operation is via a touch screen. The system has an HDMI interface for smartphones, game consoles and computers. So the tired director can play FIFA 2022, watch The Crown on Netflix or sit back and shiver at a Bayern Munich Bundesliga match.

Video calling with your mistress is not recommended, because half the A2 can watch via the giant screen. For the adulterous director it is nice that the screen is positioned in such a way that he always has a view of the windshield, so that he does not get sick.

Together in the back seats

The driver can actually sit next to the director (m/f/them), because the BMW i7 can drive autonomously at level 2+, taking over a large part of the driving functions. In less than a year, the 7-series will be ready for level 3, and then you will hardly have to do anything yourself. At the same time, it is a pity if you leave the work to the car, because driving yourself is still one of the things in this electric BMW pleasure. The two electric motors together deliver 544 hp and the maximum torque of 745 Nm can be called up at any time with your right foot. Although the BMW i7 weighs no less than 2.7 tonnes, it sprints from 0 to 100 km/h in 4.7 seconds and reaches a top speed of 240 km/h.

BMW i7 is spiritual successor 760 Li

BMW sees the electric motors of the i7 as a spiritual successor to the V12 from a bygone era and it shows. The sound of the powertrain can only be heard in the distance and wind and tire noise are effectively dampened. The air suspension all round, including optional active roll stabilization and four-wheel steering, provides majestic suspension comfort, but at the same time the driving characteristics are at sports car level.

The steering is direct and the brakes have a well-defined pressure point. In addition, the chassis remains surprisingly stable, so you certainly do not get the feeling of sitting on a rocking ship. And consumption? We arrive at 23.5 kWh/100 km, while the manufacturer’s specification is 18.4 kWh. The range is 625 kilometers with a careful right foot and under ideal conditions.

Anyone who hates plugs and swears by diesels will have some time to get used to the new times thanks to the new 7-series. The 7-series is still available with a 300 hp six-cylinder turbo diesel, although it is not known how expensive this version will be. But if you are homesick for the V8, then you should move to America. Only there you can still order the 7-series with this fine engine with 544 hp.

Conclusion: BMW i7 to buy or not?

Who knows, we will think the BMW i7 is beautiful in twenty years. But now we have to get used to the design a bit. Fortunately, you don’t see anything inside and the 7-series is a hypermodern, extremely comfortable and regal car. Although you have so many options for mood lighting, chair massage and other partly superfluous luxuries, that you also need those twenty years to fathom everything. Would we really fold out that huge TV screen in the back right? Mwah, actually we still prefer to be behind the wheel.